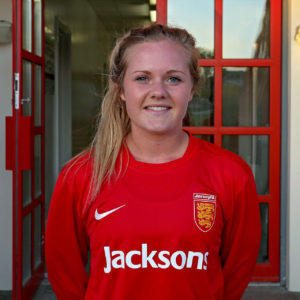 Libby currently works as a Mentor within the States of Jersey’s Education department. Much of her spare time is devoted to sport; either playing football for local club side JTC Jersey Wanderers or netball for St Lawrence NC. Libby discovered her passion for coaching whilst studying at the University of Bath, and has since been actively involved in the ever expanding and developing Jersey FA Womens & Girls Player Development Centre, where she has been involved for a number of years and currently works with the U14 representative side. Libby has also been capped a number of times for the Jersey FA senior womens team and was part of the successful Island Games Gold medal winning side in 2015. She has a real and natural passion for local and international development through the power of sport, particularly football and considered many of the objectives of J2A to be synergistic with her own.

“When I first contacted Ricky in respect of J2A when I had witnessed, via social media, some of the fantastic work already being done and having already found my love for Africa in two previous trips to Zambia and Uganda, I wanted to embellish my links and contacts here in Jersey to better aid my impact and fundraising efforts for Africa. I felt J2A was the perfect fit to embrace my own ambitions and passion for Africa and sport and I’m excited to be involved and have the opportunity to play a part in providing real and tangible benefits to young people in Africa both on and off the field through the vision and efforts of J2A’”