previous Chairman of Advisory Board 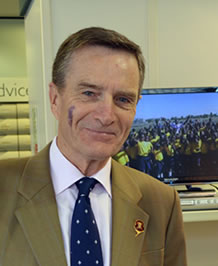 HE General Sir John McColl took up his post as Lieutenant-Governor of Jersey in September 2011 and in his official capacity as patron of the Jersey Football Association met it’s encumbant President Ricky Weir in early 2012. His Excellency subsequently enjoyed Ricky’s company as VIP guest of honour at the 2012 annual Muratti fixture between Jersey and Guernsey and was suitably enthused and encouraged by the passion for football within the Island and Ricky’s leadership thereof. After being invited to take a look at the voluntary work undertaken by Ricky in a Nairobi slum in November 2012, His Excellency was suitably impressed and delighted to offer his support and subsequently had no hesitation on being asked to act as Chairman of the advisory board the J2A Foundation. His Excellency’s support apart from hosting and chairing advisory board meetings has also indirectly facilitated private financial donors and included a personal visit to the Jersey 2 Africa 4 Football store shortly after it’s opening in September 2013. The store went on to become a great success during it’s 15 months of opening and HE visit greatly helped in enhancing and publicly promoting the store.

“The Jersey 2 Africa 4 Football Foundation has made great progress since it began work in early 2013.  The provision of footballing support, kit, and advice to deprived areas in Nairobi has improved the quality of opportunity available to young people significantly.  I am delighted to be involved with the Foundation and would encourage others to help in any way that they can.”