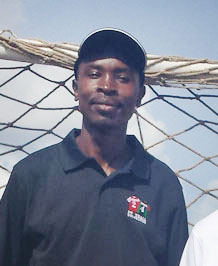 Patrick started Mukuru Combine Football Association with an aim of promoting untapped talent and engaging young people from the slums to help them avoid the negative vices such as drug abuse, child prostitution and crime, which are all to rampant in the slums. The selfless and dedicated work by Patrick and his volunteers have helped create a respected and well governed football community for young boys and girls from the slums and given them an opportunity through the football disciplines teamwork, discipline, dedication and practise to improve themselves both as young footballers and young people.

“With the support of Jersey 2 Africa 4 Football we have been able to achieve many things that we did not consider possible a couple of years ago. Our players have received top level professional coaching from Ricky during his two visits in November 2012 and 2014, whilst being grateful recipients of training equipment ranging from 100’s of items of balls, training equipment and football kits to goal posts, nets and most revered of all football boots, which many (approx 90%) of our players never had the means to buy. The lives of many of our players has positively changed as a result for the first time in their lives playing with boots rather than being bare footed. Ricky has also worked tirelessly in our interests to connect us to other helpful organisations such as Neil Hope of the RAF who has personally visited us twice during visits to Kenya and we are thankful to Ricky for that. We just wish to see him return very soon to conduct more coaching and share his knowledge and experience, which is loved and missed by players and coaches alike”